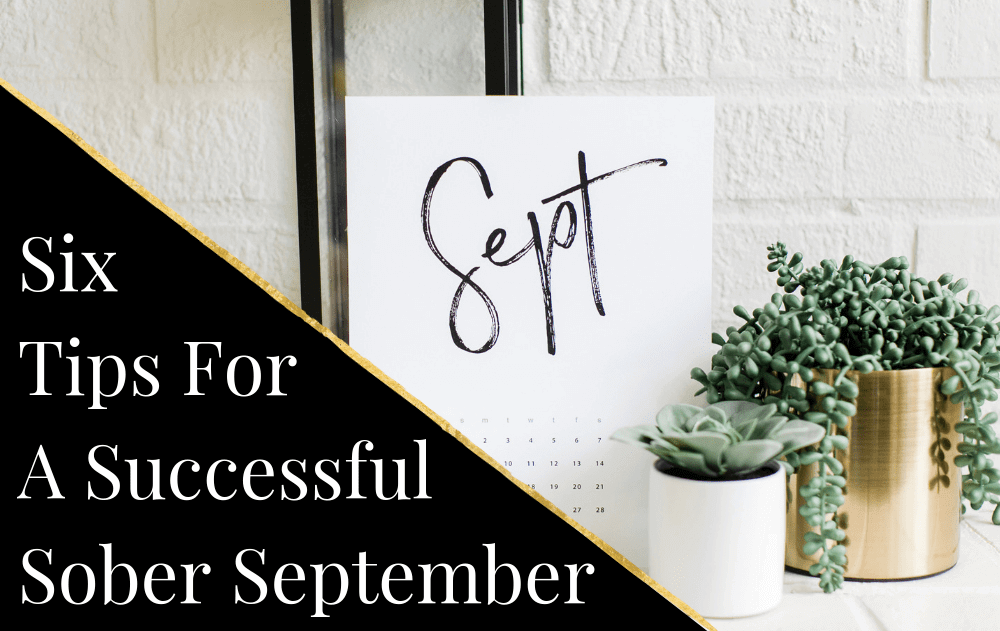 Sober September is here and in full Effect!

If you’ve been drinking more than you planned to over the past few months, now is as good a time as any to turn over a new leaf and get back on track.

Going alcohol-free is one of the most empowering and exciting things you can do for yourself. However, successful sobriety isn’t just about ditching booze and hoping for the best – there’s a bit more to it than that…

Today I want to share a few key strategies to help you have a great month.

6 Tips For A Successful Sober September

Cravings are the body’s way of trying to tell us that something isn’t right; that we’re out of balance and need to take action to feel better. As drinkers, we’ve trained ourselves to interpret that craving sensation as a cue for alcohol. But when we were younger, we didn’t do that.

Think of it this way: if your child started being grumpy, restless and irritated with everything, you wouldn’t reach for the wine bottle to soothe them, right? Instead, you’d troubleshoot the problem and try to make things better. You’d mother them.

Are they tired? Hungry? Thirsty? Bored? Do they need a cuddle? Connection? Love, help, support? As adults, our needs are basically still the same, only we’ve been conditioned to think that all we need is wine – that it’s some kind of magic fix. But drinking never, ever gives us what we really need.

A common mistake people make during a month off booze is to romanticise and glamorise the thing they can’t have. They spend the whole time focusing on what they’re missing out on and counting down the days until they can drink again.

A better approach is this: keep a list of all the so-called ‘benefits’ you think you get from drinking. Next to the list of benefits, draw two columns: evidence for, and evidence against.

For example, if you’re convinced that you need wine in order to make date night more special, what about all those times when you’ve argued after drinking too much, or become distant, sleepy and distracted? That is important evidence to note down.

Leave plenty of space between each benefit so you can add things as you go along. Even if you’re convinced alcohol definitely does provide a particular benefit – and there isn’t any evidence to the contrary – the chances are that belief will change with time.

3. Fill your head with good stuff

Keep the right mindset by using any gaps during the day to listen to a book or a podcast about sobriety. Listening rather than reading makes it easy to squeeze a chapter in here and there, while you’re driving to work, tidying up or walking home etc etc.

Before you go to bed, take a few seconds to note down at least one reason why you’re proud of yourself that day. Perhaps you’re feeling good because you didn’t drink, or maybe there’s something else you need to give yourself acknowledgement for.

When you’re struggling with your drinking, your self esteem can plummet. And when you’re feeling really down on yourself, it can seem even harder to do the stuff that’s outside your comfort zone – like stopping drinking.

You can find one thing you’re proud of each day. At the end of your sober September, look back on your list. Is there more on it than you expected? How much of it would’ve happened if you’d been drinking? This is all good stuff to reflect on.

You’ve already made one bold move by quitting drinking, so why not do another and change something else in your life that isn’t working? If you’re relying on a drug like alcohol to get through an average Monday night, it’s a sign that something else isn’t quite right.

Now of course, there are plenty of things that are far too big to fix or change in a month. But you probably can make one tiny step towards making your life easier.

Maybe it’s setting better boundaries at work, not checking your emails after a certain time, getting more help at home or just going to bed a bit earlier. Find your one small thing and commit to making it happen.

I know how tempting it is to try and do it all. As well as sober September, you want to start a new diet and master a new fitness regime. However, taking on too much at once tends to be a recipe for disaster – you end up feeling overwhelmed and ready to give up on everything.

In the long run, alcohol free living will be a great foundation for achieving your other health goals. But first, you need to get comfortable in your sober shoes. You only have a finite amount of willpower, and right now it all needs to go into mastering this one thing.

Linkedin
Posted in: motivation, sobriety
« SHE IS ME, TOGETHER ARE WE
Choose Your Battles »
QR Code Business Card
Posting....